The second stakeholder meeting in Serbia was organised as a series of individual discussions in February and March 2022 with representatives of various organisations, such as the Belgrade Centre for Security Policy, Humanitarian Law Centre, Helsinki Committee for Human Rights in Serbia, Balkan Investigative Reporting Network (BIRN), Institute for Ethnography, Institute for Political Studies, and Department of Sociology of the University of Belgrade. The meetings aimed to acquire feedback on the main research findings in Serbia.

Participants almost unanimously agreed with the findings indicating that Islamist extremism does not represent a critical security threat in Serbia. The Muslim community in Serbia is relatively small and rather resilient without the significant potential for violent religious extremism. Furthermore, representatives of stakeholder organisations emphasised that the Muslim community in Serbia was more a “victim” of global trends (war on terror, islamophobia) than an actual threat to national or regional security.

On the other hand, they underlined the significance of ethnonationalist radicalisation and far-right extremism in Serbia since it is largely integrated into the informal networks controlled by the ruling regime and state institutions. Based on their feedback, it could be concluded that the crucial problem of Serbian society, in general, is the process of mainstreaming ethnonationalist extremism that has lasted for more than three decades.

In addition, stakeholders stressed the importance of further research on the parastatal informal apparatus in Serbia that incorporates representatives of the state, far-right organisations, football hooligans, and various criminal groups, as well as the specific relations between religious communities and ethnonationalist radical and far-right groups. For instance, Islamic communities in Serbia are closely affiliated with Bosniak ethnonationalist parties. At the same time, there is a “system of co-reciprocity” between the Serbian Orthodox Church and the Serbian state, including Serbian ethnonationalist organisations. Although religious extremism is not of grave importance, religion plays a significant role in ethnonationalist radicalisation in Serbia since both Orthodox Christian and Muslim communities are considered founders of Serbian and Bosniak nations, respectively.

Another aspect stakeholders singled out as in need of further research was the influence of regional political dynamics on radicalisation and extremism in Serbia (e.g., the situation in Kosovo, and Bosnia and Herzegovina), as well as the impact of the Russian Federation and the ongoing war in Ukraine, particularly the recent invasion of this country. 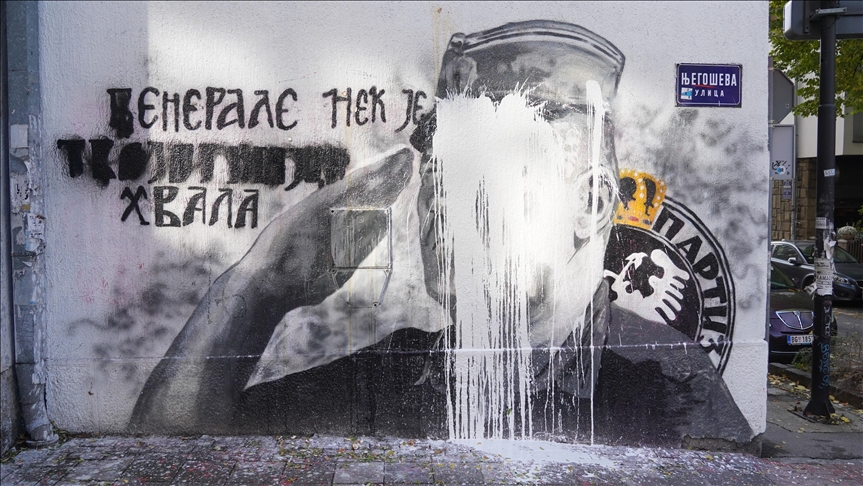 Ongoing "graffiti war" in Belgrade between far-right groups and civic activists. The main struggle is over the mural to Ratko Mladić painted in the Belgrade city centre.